Why Social Media is the New Customer Service Channel (Part 2)

The following was originally posted on the Avaya site here.

This is the second of a three-part series. The first covered the basics of customer service and social media. The third post includes my top ten recommendations on being successful.

On November 28th David Allen, the author of Getting Things Done, had a poor experience with Adobe support. After not receiving satisfactory service, he tweeted to his 1.2 million followers about his poor experience 7 times, eventually questioning the overall brand of Adobe. Within a day, he heard back from Adobe and his issue was resolved, but for 24 hours, 1.2 million people heard a trusted person badmouth Adobe. Not a good day for the brand.

As David’s example above shows, social media networks are enabling customers to act bigger, engage faster, and be better organized.  For decades, consumers have run into problems with purchased products or services from companies. In the past, complaining to a company took some time and thought. First there was complaining in person, then by letter, and with the option of the telephone, these complaints turned to call centers. As the Internet grew in popularity, call centers became contact centers with the addition of e-mail and chat channels of communication. As new forms of communication are developed and adopted, consumers use them to complain to companies. Customers want to engage with brands on their terms; their channels. They do not think in terms of discreet channels when interacting with companies. They make no delineation between contacting the company via phone, email, chat, or social. They likely do not even differentiate between sales, support, or marketing; they simply see the larger brand.

People prefer sharing their frustration with the online network rather than going directly to a company. They may believe that the company is more likely to respond to a complaint once it is in the public domain, and if so, those companies need to consider this as a failure of their non-social-media support channels. The network effect increases the downside of getting service wrong and the upside of getting it right. When service is delivered well, social media users will herald it; and when the service is poor, they will do the same. Additionally, companies need to understand that social media is much more than just a marketing vehicle. Of the actionable tweets and posts a company receives, 80% are related to service, with only 20% being about marketing (source). While sales and marketing have been the promise of social media, service is the actual delivery.

According to Gartner Inc., by 2014, organizations that ignore their customers on social media will have the same negative perceptions companies experience today when they ignore customer’s minimal expectations of support via email and phone. In fact, not only are 25% of customers likely to share a postivie experience, but 65% will share a negative one (source). Furthermore, responding to questions about products through social media will become table stakes for marketing departments. According to Carole Rozwell of Gartner, the failure of a company to respond to a social media user can lead to a 15% increase in the brand’s churn rate (source). This gives further evidence that companies must put a social media monitoring program in place or risk financial losses.

While social networks may not be as real-time as a voice call, users do expect a relatively quick response. Laura Bassett, Marketing Director at Avaya says that “Twitter users expect a response within 5 minutes when complaining about a brand”. While most companies won’t be able to manage a response time like that, they are aware of the need to be timely. In a recent study where researchers tested response times, Zappos proved the speediest, posting an average response time of 54 minutes. The next closest companies were Best Buy (1:47), Overstock (1:53), Dell.com (2:28), and L.L. Bean (3:55) (source). Zappos’ quality of service provides them so much positive word-of-mouth buzz that they spend significantly less on marketing than their rival retailers. This is a good example of how an investment made in the customer service department can deliver significant value for the marketing department.

Many individuals, mostly celebrities, have put this network effect into action, with the number one Twitter account, belonging to performing artist Lady Gaga (3.5 million followers.) In fact, 84 of the top 100 Twitter accounts belong to individual people (source). What these individuals say about a company in social media can have a greater impact on the brand than what the company says about itself. A single negative comment on a product or service by one of these influencers can result in significant impact to the brand. The earlier example of David Allen shows this as does an incident that my favorite movie director, Kevin Smith, had with Southwest Airlines.

Mr. Smith had a problem with Southwest Airlines in February of 2010, he took to his Twitter account and its 1.6 million followers at the time (see image of all 20 tweets here). Within sixteen minutes, Southwest had replied, and while that speed helped, the public relation crisis had already begun. Most of the back and forth was over within two days, but it was picked up by national press as well as a strong following in social media (including over 15,000 tweets). Kevin himself tweeted eleven times, each going to his 1.6 million followers and then being retweeted many more times.

After 5 days, the crisis was completely over. Southwest’s brand took a hit as two-thirds of the comments on Twitter were negative towards Southwest. 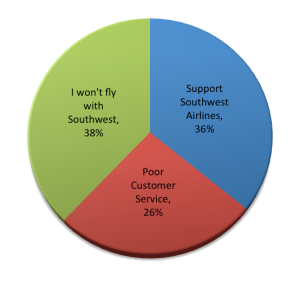 An interesting comparison is a more recent tweet from Kevin about his flight experience on Virgin Atlantic Airways, which was much more positive as he was seated next to the company’s owner, Sir Richard Branson. 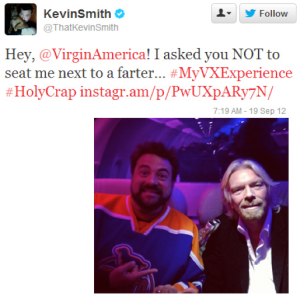 Given this, it is surprising that over half of consumer-facing Fortune 500 companies are not keeping up with their customers desire to use social media. They do not provide links to their Twitter or Facebook accounts on their website “Contact Us” pages. Half of these stragglers do not mention their social media presence on their website at all (source). Not only does this prevent many of the brand’s consumers from interacting the way many want to, but it also portrays the brand as being behind the times, something that can be quite harmful for brands targeting younger demographics. In fact, 15% of 16-24 year old customers prefer social media over any other channel for customer service (source).

USAA, a bank primarily servicing members of the US Armed Forces and their families, is known for delivering the highest levels of customer support, earning them many awards (source). In 2009, USAA started monitoring customer messages on social media sites: “As you’re listening, you don’t want to be a stalker and observer on the web — you want to be jumping into those conversations, particularly as it pertains to reputation management or improving the customer experience,” USAA’s VP of Member Communications, Rhonda Crawford said. Even with USAA’s reputation for customer service, members still take to social media channels as a last resort. “It’s a complaint that comes through a megaphone,” Crawford observed. “When people are tweeting every half hour about a problem they had at the call center, you want to jump on that quickly and resolve the situation.” Crawford also explained USAA’s policy to take social media conversations to a different medium when private details like a customer’s member number are required.

USAA is not the only bank that takes supporting their customers and brand through social media seriously. Citibank ran into a brand problem that started on their blog and migrated to Twitter. While the bank responded to the event in 36 hours, timely for a bank, it wasn’t timely enough for this channel. “The crisis was done in three hours,” Citibank’s Director, Digital Channel Strategy & Social Media, Jaime Punishill said. “In three hours, we had lost the war… Make sure that you prepare for the worst, because it will happen, and it will happen fast..” (source: Crosman, P. (2010, July). Social Butterflies. Bank Systems & Technology, pp. 33-34)

Hopefully I’ve convinced you of the need to treat social media as a new customer service channel for your brand. In my third and final post on this subject, I’ll provide ten recommendations on how to go about successfully supporting you customers via social media.