Not sure what happened, but I seem to have taken zero pictures on the 26th, oh well.  We cleared a bunch of property of small trees and brush, making an impressive burn pile.

On Tuesday, we focused on the same spot, doing a good deal more clearing and burning. It was very rewarding to see just how open and clean this area now is. And let’s be honest, who doesn’t like burning big bonfires of brush!

M continues to love getting time on the ATV or “four wheeler” was we call it. He will drive around with me sitting behind him to the point that he says his thumb hurts from holding the gas down!

T continues to not want to really drive, but does like me to take him for a fast drive. I am able to get him to drive through the gates as I open and close them for us.

Afterwards, Pops has me do some harrowing of the long drive way to the house, a drive on the farm, as well as a paddock and a chewed up part of a field. We do the harrowing with Pops’ very old tractor for some reason. The noise and exhaust prevent the kids from joining me, so it proved to be a nice hour of alone time. 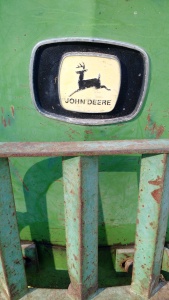 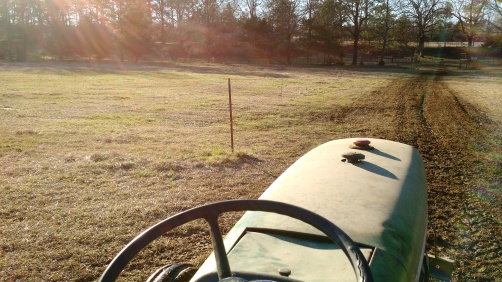 Another gorgeous day on the farm. While it started out freezing cold, the sun really came out and we got up to the low 60’s today. Unfortunately, last night, M came down with a fever thing that T had earlier in the week, and then S got the same this morning. M recovered well and was active, but S stayed bundled up on a couch all day.

The boys went out and we helped Pops pick up sticks and debris to pile up with other such things to help create a bern to better manage water and reduce erosion. And yes, M seems set on wearing his sweater vest every day this week. 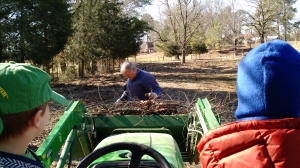 We did a lot of walking and playing with the dogs as well. We painted a gate (barn red, of course), and started to move the rails for a new herb garden. Grandma was also sporting the day-glo orange hats. 🙂

As the day wound down, we fed all the animals while Grandma played “bump” with the boys.

Bear with the slight deviation from non-personal and into the personal space.

Every year, my family and I head down to High Hope Farm, run my mother and stepfather. We love coming for visits and typically come between Christmas and New Years, but due to two funerals, we had to reschedule for late January. Anyway, we’re here now and I thought I would share some moments.

First off, Grandma had given each of the kids their own rolling suitcase, which they loved having for this trip:

The next morning, as typical, our kids woke up before dawn and “sneaked” out of the bedroom to go find their grandparents and get the day started. After bellies were filled with homemade waffles, we were out for the morning chores. It was in the low 30’s but with the sun shining, and good jackets, it was quite pleasant. M has decided, and rightly so, he can drive the ATV as long as I’m on it with him. He’s quite good at steering and judging speed. Here is a shot of the chickens who are ready to move to another pasture, or to the hot tunnel to ride out the rest of the winter.

Afterwards, we had a quick lunch and headed down to Mississippi St. to see the Bulldogs take on the Georgia Bulldogs. The boys and I had gone last year for an evening game, but S got to join her big brothers this year. We were pleasantly surprised to see that for the pre-game even for kids, not only were there basketballs to play around with on the court, but a bouncy-house! 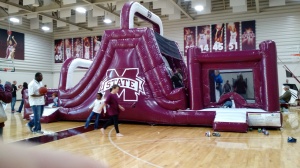 Then on to the game where M really got into the score and who to root for where T was more concerned with why one fan nearby was yelling at the court so much.